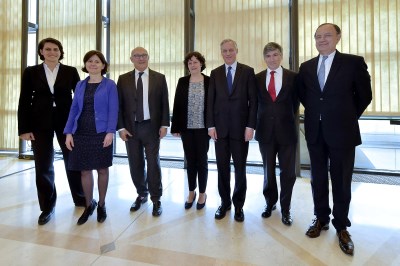 Bruno Le Maire, Minister of Economy and Finance, Chairman of the High Council

Bruno Le Maire has been Minister of Economy and Finance since May 2017.

A former student of the École normale supérieure (ENS ULM) and of the École nationale d' administration (ENA), Bruno Le Maire was successively Secretary of State for European Affairs (2008-2009) and Minister of Agriculture, Food, Fisheries, Rural Affairs and Spatial Planning (2009 - 2012).

He is also Chairman of the Autorité de contrôle prudentiel et de resolution (ACPR - French Prudential Supervisory and Resolution Authority), of the Observatoire de la sécurité des cartes de paiement (OSCP - The Banking Card Observatory), and of the supervisory boards of the Institut d’émission des départements d’Outre-Mer (IEDOM) and of the Institut d'émission d'Outre-Mer (IEOM). He is a member of the Governing Council of the European Central Bank (ECB), member of the board of directors of the Bank for International Settlement (BIS) and alternate Governor at the International Monetary Fund.

The Governor of the Banque de France is in charge of the financial and monetary stability of the French economy. He also acts in order to ensure the smooth functioning of the payment system and the price stability.

François Villeroy de Galhau is an ENA graduate and a former Inspector of Finance.  He was head of the General Tax Directorate (2000-2003), then became the Chief Executive Officer of Cetelem (2003-2008). He headed the retail banking activities of BNP Paribas in France (2008-2011) before serving as Chief Operating Officer of the BNP Paribas group, in charge of domestic markets and of corporate social responsibility (2011-2015). In 2015, French government entrusted him with an assignment on corporate investment financing.

Bernard Delas has been vice-Chairman of the ACPR since July 16th 2015. He was named by the French Minister of the Economy for a renewable five-year term.

The vice-Chairman of the ACPR is charged with preserving the stability of the financial system and protecting the customers of the financial institutions supervised by the ACPR (the organizations of the banking and insurance sectors). He/she participates in the design and implementation of policies which prevent and resolve banking crisis in order to reduce or suppress public financial support. In order to reach its goals, the ACPR has the authority to supervise financial organizations and to apply sanctions.

The vice-Chairman works closely with the other competent foreign authorities, in particular those of the European Economic Area, to ensure financial stability and the convergence of the national prudential policies. He/She assists the ECB in fulfilling its mission of prudential supervision.

Robert Ophèle has been Chairman of the AMF since 1 August 2017. He was appointed by the President of the French Republic.

The Chairman of the AMF regulates participants and products in the French financial markets. He is tasked with safeguarding investments in financial products, ensuring that investors receive material information, and maintaining orderly financial markets. To reach these goals, he is able to regulate, monitor, and, where necessary, conduct investigations and issue sanctions. He can also offer a mediation in case of a conflict between different entities.

The Chairman of the AMF is also a member of the Haut Conseil du Commissariat aux Comptes (H3C-French Superior Council of Statutory Auditors), the Colleges of the Autorité des Normes Comptables (ANC - French Accounting Standards Authority) and of the ACPR.

A graduate of ESSEC, Robert Ophèle joined the Banque de France in 1981, where he spent most of his professional career in banking supervision, the design and implementation of monetary policy and central bank financial management. He was seconded to the FED, Director of Budget and Management Control, Assistant to the Director General for International Studies and Relations, then Director General for Operations before holding the post of Second Deputy Governor of the Banque de France from January 2012 to July 2017, where he was a member of the Supervisory Board of the ECB.

Patrick de Cambourg has been Chairman of the ANC since March 3rd, 2015. He was named by the French President for a renewable six-year term.

The Chairman’s of the ANC mission is to simplify and update accounting standards for French firms, while also putting forward reforms aiming at improving the efficiency of the international accounting standards. He also coordinates all theoretical and methodological work carried out in this field.

The Chairman of the AMF is also a member of the Colleges of the ACPR, the AMF, and the Conseil de Normalisation des Comptes Publics (CNOCP-French Public Sector Accounting Standards Board).

Patrick de Cambourg graduated from Panthéon-Assas University (Public Law and Commercial Law) as well as from the Institut d’étude politique de Paris (IEP). After a career at Mazars France, he became President and CEO of Mazars Group in 1983.

Agnès Bénassy-Quéré was named by the Chairman of the French National Assembly in June 2014.

Agnès Bénassy-Quéré is a professor of economic policy, international macroeconomics, and international monetary policy at the University Paris I Panthéon-Sorbonne (2011) and an associate researcher at Paris School of Economics (PSE). She is also a board member of the Banque de France (2015), Chairperson of the French Council of Economic Analysis (2012), and member of the Commission économique de la Nation (1999 - French National Economic Commission)

Her research interests focus on the European monetary area (exchange rate, tax harmonization, market regulation) and the international monetary issues (the development of the Renminbi, DTS, exchange rate regimes). She has written seven books including L’économie de l’euro (with B. Coeuré), and Economic Policy (Oxford University Press, with B. Coeuré, P. Jacquet and J. Pisani-Ferry).

In 2000, she was rewarded “Best young French economist” and she became Chevalier de la légion d’Honneur (Knight of the National Order of Merit) in 2013.

Agnès Bénassy-Quéré is a graduate of ESCP Europe Business School and has a doctorate in economics from Paris IX-Dauphine University. She got the most selective French competitive examination for economic teachers (Agrégation de Sciences-Sociales) in 1996.

Raphaëlle Bellando was named by the Chairman of the French Senate in June 2014.

Raphaëlle Bellando is a professor of Economics at the University of Orléans, and has been the director of the Laboratoire d’économie d’Orléans (a joint research center of the University and the CNRS) since 2012. Previously, she led the Finance and Macroeconomics’ research team of this laboratory from 2007 to 2012.

She has been an elected member of the Conseil national des université since 2011, and coordinated, with Jean-Bernard Chatelain (University Paris-I), the European Research Group on Money Banking and Finance between 2007 and 2014. She has also been the rapporteur of the working group on the 'accessibility of financial and banking data' of the Financial System and Financing of the Commission for the National Council on Statistical Information since May 2014.

Her research interests focus on investment funds strategies and more generally on financial and banking risks.

Raphaëlle Bellando graduated from Paris-Dauphine University and completed her doctorate of Economics at the University of Orléans in 1991.

Hélène Rey was named by the Minister of Finance and Public Accounts in June 2014.

Her research focuses on the determinants and consequences of external trade and financial imbalances, the theory of financial crises and the organization of the international monetary system.

Hélène Rey graduated from ENSAE (National statistics and economics engineering school, Paris) and earned a degree in Engineering Economic Systems from Stanford University. She completed her doctorate at the London School of Economics and the Ecole des hautes études en sciences sociales (EHESS - School of Advanced Studies in the Social Sciences, Paris) in 1998.