The Haut Conseil de stabilité financière (HCSF – High Council for Financial Stability) is the French macroprudential authority tasked with “supervising the financial system as a whole, with the aim of safeguarding its stability and ensuring a sustainable contribution of the financial sector to economic growth”. (article L.631-2-1 of the French Monetary and Financial Code).

Its mission is to help to mitigate and prevent systemic risks, which can be defined as a risk of widespread disruption to the provision of financial services caused by an impairment of all (or a large part) of the financial system, and which has the potential to have serious negative consequences for the real economy. In order to achieve this goal, the HCSF has adopted a series of five intermediate objectives which guide the operational implementation of its macroprudential policy:

The HCSF is also responsible for facilitating cooperation and exchange of information between the institutions that its members represent. This cooperation is one of the key elements of an efficient supervisory and regulatory framework. It helps to eliminate blind spots in the financial supervisions, and allows for a better oversight of risks arising from interlinkages between participants/sectors and interactions between regulations.

The HCSF meets at least four times a year and submits a publicly-available annual report to the French Parliament.

In order to achieve its ultimate objective and prevent emergence of systemic risks, the HCSF has three types of macroprudential instruments which complement each other:

Among its binding powers, the HCSF can, on a proposal of the Governor of the Banque de France, decide to:

The HCSF bases its decision-making on the principle of guided discretion, where a set of rules and indicators are used to signal what kind of adjustments might be necessary, but the authority exercises its own judgement when making its final decision, taking into account all the available information. 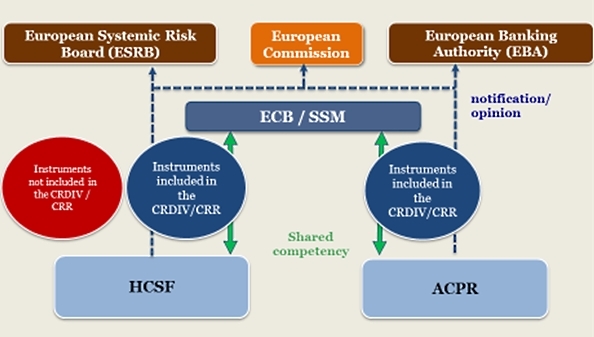 Composition of the High Council